Where Is Your Generation Living?

Have you ever thought that you may desire to live in a certain area because of the generation you are a part of. It sounds a little crazy but it’s true. Realtor.com did a study that pinpointed that most desired locations for Millennials, Generation X’ers, and Baby Boomers. The stereotypes that go hand-in-hand with each generation display why they are flocking to areas that are filled with the people of their generation.

Millennials Are Flocking To Big Cities Despite The Cost 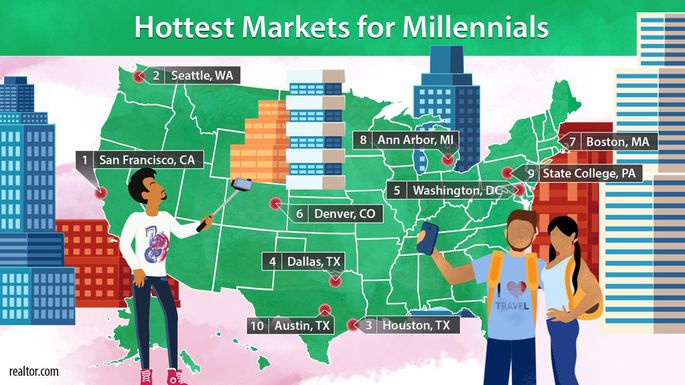 Each generations has unique and specific wants and needs when it comes to their desired location to call home. Millennials are often seen as a technology obsessed and self obsessed generation. Not to mention that most of them are trying to keep their head above water in the huge pool of debt that they got themselves into. It’s no surprise that Millennials want to live in a tech hub that has a great nightlife and cafes that are social media worthy. In Realtor.com’s study the number one destination for Millennials is San Francisco, California. The fact that the average home price in San Francisco is $846,400 (according to Realtor.com) is astonishing but Millennials think it’s well worth the steep expense. Millennials tend to think that the price of more debt is well worth the lavish lifestyles they typically live. There are typically great high paying jobs within tech hubs which is one of the reasons why Millennials are okay will taking on more debt in order to support their fun lifestyles. 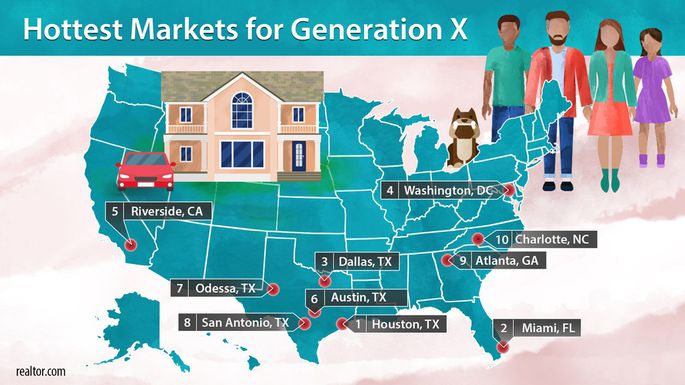 The generation that isn’t mentioned nearly as much as Millennials and Baby Boomers is Generation X. While the stereotypes for Generation X are cynical and disengaged, the locations they choose to live say otherwise. People who fall into the category of Generation X typically have children in school and want to get the most bang for their buck while living in a location with good school districts. Realtor.com’s study stated that five out of the top ten locations for the individuals of Generation X are in Texas with Houston being number one. Generation Xers are usually looking for a four bedroom suburban homes that are located in a nice community with plenty of amenities for their whole family to enjoy. The study shows that Generation Xers like to live in places with warmer temperature which is another reason why Texas holds five out of the ten most popular destinations for the Generation Xers. The home buyers of Generation X typically go for a home with a price around $260,000, according to Realtor.com’s findings. Even though Hurricane Harvey left billions of dollars worth of damage to Houston, Generation Xers are taking advantage of the lower prices. Hurricane Harvey destroyed everything in its path when it reached Houston but the messy aftermath gave thousands of people employment to help build Houston back up to what it was before. So for many people, especially those of Generation X, now is the best time to buy a home in the Houston area because they are also able to find a new employment within a short commute from their new home. 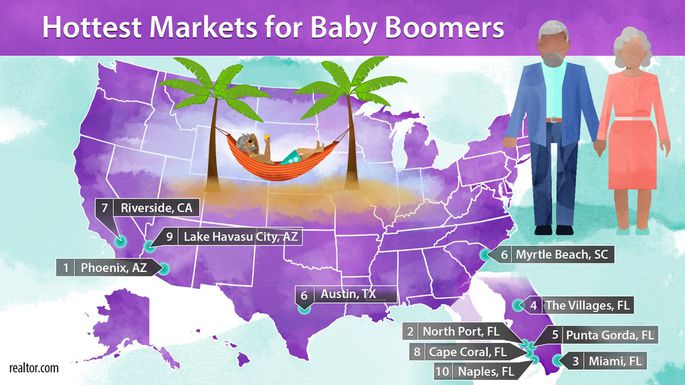 Last but not least is the Baby Boomer generation. The Baby Boomers’ stereotypes say that they are rebellious, yet set in their ways. Realtor.com’s study doesn’t quite give the same information about Baby Boomers when it comes to where they want to live and why. When you think of Baby Boomers what comes to mind might be sunshine states and them enjoying activities at their local senior center. According to Realtor.com’s findings Baby Boomers prefer states with lots of sunshine to states with mild summers and cold winters. The study reveals that six out of the top ten locations for Baby Boomers are in Florida, but the number one location is in fact Phoenix, Arizona. Realtor.com states that on average Baby Boomers spend $329,000 on their home. It’s no shock that Florida holds more than half of the top ten desired locations for Baby Boomers. Florida not only has beautiful sunshine but also the added benefit that retired individuals don’t have to pay income tax on the withdrawals from their retirement accounts. When Baby Boomers relocate to their new homes in the sunshine states they also tend to also downsize in the process. Most of their children are now adults that are out on their own and are even raising families of their own. Baby Boomers don’t need large homes to accommodate a growing family anymore, instead they need just enough space for themselves and their belongings and possibly an extra room for when they have visitors.

Enter to WIN the ultimate experience!